I couldn’t resist. Sheriff Matt Logan first appeared in Second Chance Reunion, in a lonely outpost in the New Mexico desert. Then he moved on to Wyoming, to the dying town of Stoverly, near where the Selkirk family has its vast cattle ranch. Tess Selkirk has had him on speed dial for years as she’s been finding herself and rebuilding her home town. While one Selkirk family member after another has struggled to find love and solve family problems, Matt Logan has always been around to help. Now it’s his turn to find personal happiness. Sheriff Logan Meets His Match is #7 in the Selkirk Family Ranch series. Woo-hoo! 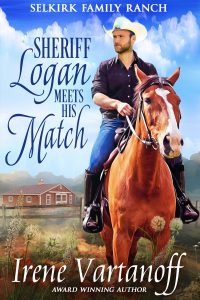 Hard times have forced Nicole Forrester to return to the small Wyoming town she fled years ago as a pregnant teenager. Her son has special needs, she’s out of a job, and they must regroup. Confronting the wealthy Selkirk ranch family that hustled her into exile is not what Nicole wants, but for her teenage son’s sake she’ll take the chance this summer and try to stay under the radar. If only the sheriff would stop interfering, she could visit her elderly father, search for a job, and find a new placement for her son. If only the sheriff would stop looking at her. If only she could stop herself from looking back at the handsome man who makes her pulse dance.

Sheriff Matt Logan intends to do his job in his usual laid-back manner, checking out who Nicole is, who her son’s father is, and what this means to the Selkirk family. To his surprise, he discovers he has a personal interest in Nicole that tangles up his plans for the future. When he asks her out, will she set aside her hostility and say yes?

A sweet, discreet romance with clean language, Sheriff Logan Meets His Match can be read as a stand-alone story and is available at Amazon. Click here to check out this heartwarming romance.