My Experience of the San Francisco Ring Cycle 1, June 2011

Seeing a Ring Cycle is a big deal. Although it is perfectly possible to enjoy all four parts of Wagner’s masterpiece about the downfall of the Norse gods individually, seeing the complete story within a very short span of time is what he wanted the audience to experience. It pays off. The cycle is a profound experience that is bigger than the individual stories of each opera, and bigger than the characters. It is a cumulative experience, as each music drama builds on the one before. By the end, the audience is wrung out emotionally, aware that this has been a significant music event.

The San Francisco Opera tried to create a festival atmosphere for their three Ring Cycles by linking to many other experiences available during the week. These were well-attended and in my opinion very successful. There was even a lecture in the Asian Museum on Wagner’s link to Buddhism (which I did not attend as I was busy elsewhere). According to the Wagner Society, the SFO made an unprecedented effort at outreach and made sure to publicize the Wagner Society symposium with all the other items listed as available in conjunction with the Ring Cycle. I went to two all-day symposia and learned a lot from them. I also took a backstage tour of the house, and saw a re-staging and updating of a 1904 spoof by operetta composer Oscar Straus called The Merry Nibelungs. Very funny. Meanwhile, back at the opera house, before each performance there was a free lecture, half of which had ideas new to me.

One thing a lecturer said that made a lot of sense is the characters and the plot of the Ring are not what you should follow, because they don’t come across as unified over the four operas. Instead the discourse (or theme) is consistent even as people come and go. The two main antagonists, Alberich and Wotan, aren’t both in all four operas. They don’t need to be, because they each set events in motion that carry through without them. Das Rheingold starts up the basic conflict. Alberich steals the Rheingold and then loses it to Loge’s trickery at the behest of Wotan, who is trying to cheat the giants who built Valhalla out of their agreed-upon fee, his sister-in-law, Freia. Alberich, rejected by the Rhinemaidens, forsaking love for power, is often viewed as the villain of the piece, but Wotan, also choosing power over love yet regretting it, can be called a villain, too. Neither man is entirely good or entirely bad, and each causes pain and suffering for others. In this production, they also appeared to be destroying the environment, which got more smog-filled and industrial as the story proceeded.

Another surprise way of viewing the Ring Cycle is to call Brunhilde the hero. Siegfried is usually assumed to be that, but he’s too naive and immature to make his way safely through the evil real world, and he’s too foolish to give the ring back to the Rhine where it belongs. Although he inherits his father Siegmund’s sword, Siegfried does not inherit his wariness or understanding that other people can be enemies and users. It’s up to Brunhilde, who is in all three of the main operas (Wagner considered Das Rheingold to be a prologue) to understand the dire consequences of possessing the ring. At the end, she cleanses the ring of its curse and restores world balance by wearing it as she immolates herself on Siegfried’s funeral pyre, which lights Valhalla on fire, too. 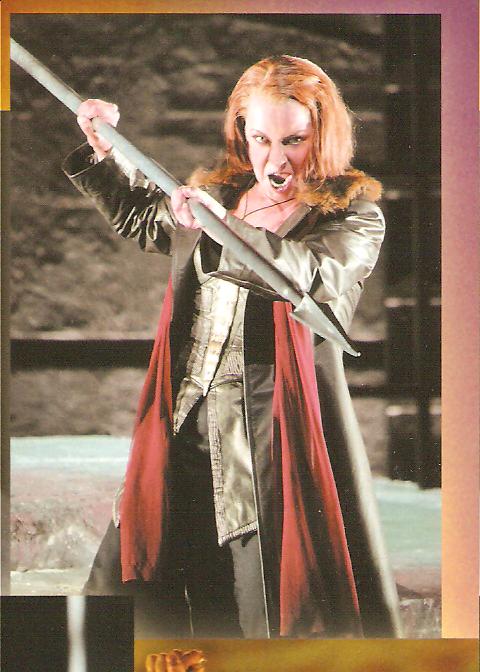 This production is an especially feminist one, I am told. Even as Sieglinde is cowering as the abused wife of Hunding, costumed in a shapeless dress, her half-sister and future daughter-in-law, Brunhilde, is striding confidently across the stage garbed as a 1930s aviatrix. Having the other Valkyries arrive by parachute in the famous Act III ride cements the tone of early feminist adventuring. Funnily enough, I had seen this Brunhilde, Nina Stemme, in the La Scala production simulcast to movie houses. In that, all the Valkyries wear froufrou ballgowns, which undermines their perceived power. In the SFO version, Brunhilde is wearing a bustier and leather pants under her long coat. She looks sexy but active, not too different from the weapon-wielding heroines we see on book covers of paranormal novels. Costume (and body type) makes a difference. Maybe it shouldn’t, because if you close your eyes, even the paunchy middle-aged guys I’ve seen play Siegmund could sing the role. I was in a back row at the SFO, far enough away to believe the illusion of youth that was projected. I didn’t even know that the two singers playing Siegfried on successive nights, Jay Hunter Morris and Ian Storey, were both wearing beards. At times I wasn’t entirely sure they were different people. As for the feminist theme, sadly, we know that the daring women of the 1930s were forced into subservience as hausfraus soon after their bravery in World War II. Female pilots gave way to sex object stewardesses on commercial airlines. When Brunhilde’s love story with Siegfried goes wrong in Gotterdammerung while he’s under an amnesia spell, she’s dragged into a conventional womanly role as a bride and Gutrune is introduced as a total trophy wife. It’s not hard to take this as an ironic comment on the cyclical role of women, from weak  (Sieglinde) to strong (Brunhilde) to weak  (Gutrune and Brunhilde) to strong again (Brunhilde). Or one could say from oppressed to daring.

Siegfried is a marathon for the title character, who must be by turns a boisterous teenager intent on annoying his adopted parent, a bold hero fighting a dragon, an appealingly lonesome boy, and then a passionate young man in love. Oddly, all the lectures beforehand never mentioned how touchingly vulnerable Siegfried is. By the time he finds Brunhilde, whoever is singing Siegfried is tiring and she’s full of power. Even so they put across a very effective love scene, full of enthusiasm and caution from two virgins. In Die Walkure, the teenage Brunhilde happily jumps on her father’s back and gets a ride (from Wotan!). At the end of Siegfried, she jumps on his back. Obviously, she’s transferred her affections. It worked.

I am not a fan of the plot of Gotterdammerung but there was some terrific acting and singing in it. The villainous Hagen had a great voice, and the Gutrune was the embodiment of a bored fashionista type, who is later empowered by Brunhilde. Plus there were some funny bits when Alberich invades Hagen’s dreams. Best of all, Brunhilde causes an enormous scene, raising holy hell, during the double wedding. She’s still wearing her warrior’s boots under the gown they’ve shoved her in, a perfect image of the feminist struggling with an oppressive sexist culture. I am told that we didn’t see skyscrapers burning in the final scene because, post 9/11, nobody wants to see that here. I agree, even though in Die Walkure, Wotan is in a sky-high corporate boardroom, and in Gotterdammerung, the Gibichungs live in what appears to be a glass-and-steel nerve center of an industrial complex. These buildings should have burned. Perhaps in a future rendition of this production they will. Regardless, Brunhilde’s final moments, beautifully sung, were the emotionally effective culmination of the cycle.

When it was over, no one was hooting or in a mood to until the curtain came up; then there were loud ovations. After all, we’d been through a lot. After great conflict, tragedy, and drama, the world had settled back on its axis. The question remained, would all this trouble start all over again? Part of the theme was a landscape polluted and despoiled by industrialization, and people destroyed by the greed of others, a theme very close in the 19th century, and still too close today. Few of us watching found much comfort in the too-precious bit of having a white-garbed child brought forward to plant a sapling, symbolic of the tree of life growing again. This also might be something the director will want to rethink.

I had seen half of this production in DC before the Washington National Opera ran out of money, so I expected to like it; the SFO retained much of the original. This production does not feel foreign or medieval or, worse, clogged with smartass directorial bright ideas that run counter to the composer’s intent. It may even improve, given that the last two operas in this Ring Cycle haven’t had much time for their productions to mellow. Many if not most operas end in the deaths of the protagonists, but the Ring Cycle ups the ante. Not only is just about everybody dead, but the world of the gods is on fire and possibly the rest of the human world, too, until the Rhine River rises and restores order. The Ring has a profound theme at its core and is a deeply moving experience, if you see or hear it at the right moment. This was my right moment.