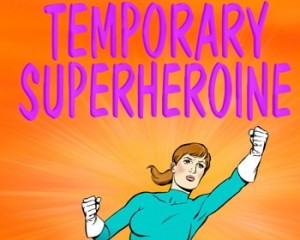 My very first book, Temporary Superheroine, will be released in the next few days. It’s a light roman à clef superhero adventure with a dash—only a dash, I promise—of romance. Longtime comics fans will recognize some amusingly familiar elements in the storyline, which I included to pay tribute to our most beloved comic book adventures. (I don’t want to give anything away, but look for peril above a vat of boiling chemicals. ‘Nuff said?)

My superheroine’s mission is to save the universe, and she’s up against a powerful opponent. Plus she’s young, she’s untried, and she’s been volunteered. It’s complicated. It’s crazy comic book fun. It’s soon to be available as an ebook and in trade paper.