Skip to content
Home Books The Ranch Master, or Meanwhile, Back at the Ranch

The Ranch Master, or Meanwhile, Back at the Ranch 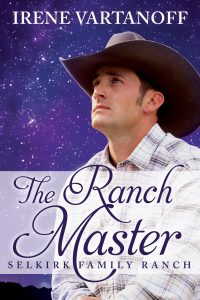 “Meanwhile, back at the ranch,” was a cliché by the mid-twentieth century, and it probably was used for another fifty years previously, the heyday of the American Western. This phrase in the old movie serials switched focus from one scene to another. With Book 4, the Selkirk Family Ranch series now switches focus from the three Selkirk siblings, Baron, JD, and Tess, to other people we’ve already met in this series.

Cal Davis is the romantic hero of The Ranch Master, and Tanisha Robinson is the heroine. We met Cal in Book 1, Captive of the Cattle Baron, when Baron Selkirk was unwillingly managing the vast Selkirk ranch while his whole family was in Cheyenne, Wyoming, because JD was in the Veterans’ Administration hospital there. We met Cal again in Book 2, Saving the Soldier, when JD was gathering up ranch hands after a snowstorm so they could make a heroic effort to feed the cattle. And Cal was very present in Book 3, Cowgirl Rescue, when Tess came back to the ranch and was having a rocky romance with Rolf as well as frequent confrontations with JD. Fun times, but Cal mostly kept his mouth shut and his thoughts to himself.

In The Ranch Master, Cal’s thoughts are revealed, along with several huge surprises. No spoilers here, except to say that Cal’s long history on the ranch is a lot more complicated than we’ve known previously.

And what about Tanisha Robinson? The motherly therapist in Saving the Soldier who visited JD in the VA hospital and gave him some good advice—advice he ignored—is now running a veterans’ rehab center on ranch property. She’s busy and happy, and she’s not looking for romance. But romance finds her anyway when Cal starts courting her in earnest. Their lighthearted romance contrasts poignantly with the secrets Cal uncovers from the past, secrets that ultimately involve the entire Selkirk family and the future of the Selkirk ranch.

Books 5 and 6 in this series are already in progress. Don’t wait to start reading The Ranch Master, the story that upends everything we thought we knew about the Selkirks.