Why I Will Never Be Seen in This Blouse 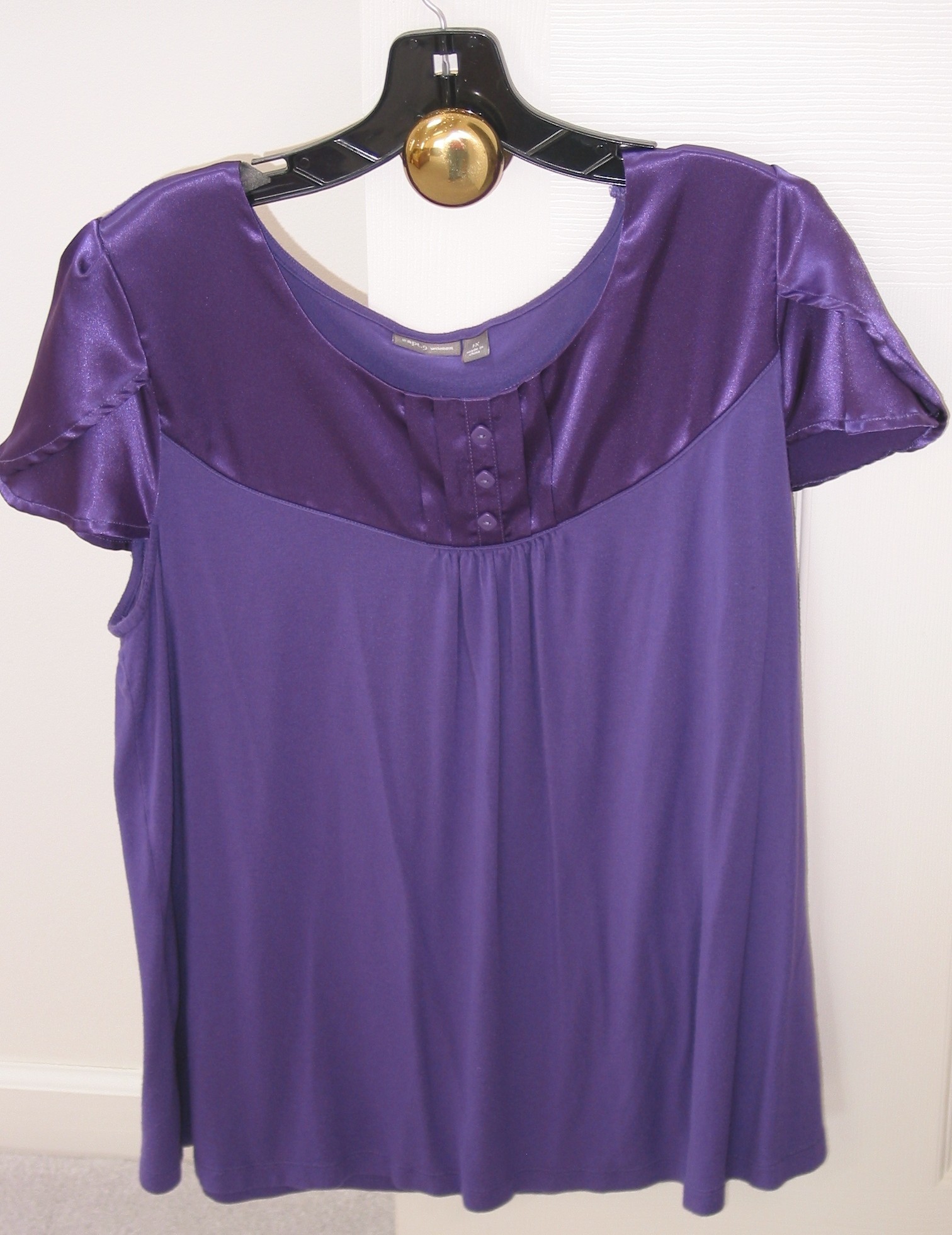 I will never be seen in this blouse. Why? Because even before the first day I wore it, I saw a young woman who must weigh about 100 pounds more than I do wearing the same blouse. I had bought the blouse, which as you can see is in the current baby-doll style, to have something fresh and fashionable for the annual Romance Writers of America national conference. Obviously, other women did exactly the same, which makes sense since most of us writers live in tee shirts, sweats, and disreputable jeans the rest of the year. Okay, except the ones with day jobs. But you get my drift. We all ran out and bought clothes to spiff up and Look Professional.

After my moment of horror, I decided to wear my new blouse with a jacket over it during the conference. That worked. Then I wore it a couple of times when shopping or on visits to relatives, but it seemed rather girly and frilly for me. So I put it in the closet to save for best. Which in my life is a rare event.

Imagine my shock when months later, on last fall’s The Biggest Loser TV show, Season 8, I saw that very blouse on Shay Sorrells, the social worker whose beginning weight was 476 pounds. The same blouse, I kid you not.

I can’t bear to wear a blouse that has been worn on national television by someone so enormously fat that she was one step away from gastric bypass. Am I in denial about how many steps I myself may be from that same fate? Good question. I don’t have an answer. What I do know is that I am not willing to be seen in a blouse that screams “from a fat lady store”—even though I purchased it at Kohl’s, which is not a fat lady store.

Does this say something about the feelings most of us have about fat people—even when we are fat people ourselves? You bet. I want to disassociate myself visually from women far heavier than I am, women who are morbidly obese and out of shape and short, too, so their bulges have bulges. But deep down, I know that the 110-pound girls look at us bigger women, regardless of how many hundreds of pounds separate us, and think we’re all in the same league: The fatsos.

This weekend, hundreds or even thousands of us will show up at the Washington, DC convention center because The Biggest Loser is holding auditions. At first I thought it might be funny to go down and see the people who come to try out. Then I thought it would be very sad. For a few years now I have been noticing more and more people showing up to conventions—especially science fiction conventions—in those motorized scooters. They have gained so much weight since I first knew them that they can’t walk well enough anymore to traipse through the confines of a large hotel or convention center. Since The Biggest Loser has brought more and more hugely obese people out of the closet and onto the show, there’s a good chance that I could see dozens of people struggling to audition who can hardly walk. Who sleep each night sitting up in chairs, with oxygen masks to save them from their sleep apnea. Who have good reason to fear that fat will kill them. No, it’s not a scene I want to see. It does not make me happy to think that there are many people vastly heavier than I am. Not at all.

So does it matter that I won’t be wearing that blouse? Yes, because to me it means I have not given up. I still want to think of myself as a thinner person trying to get out of my fat shell. Aligning myself visually with hugely fat women is, to me, a form of throwing in the towel. It’s like ordering all my clothes from fat lady catalogs in size 5X or higher.  That method of shopping is far easier than trying to find normal size clothes that fit, and often those catalog clothes are very pretty. But they’re mostly big pieces of cloth meant to drape and hide the enormous fat below. Not a pretty thought or reality. I believe it is much saner on my part to continue to yearn to wear the smaller fashions that slimmer women can. At least I’m still trying to get there. The irony is that Shay Sorrells, by exposing her fatness on national TV, might get there first. Wearing a blouse that I refuse to wear.